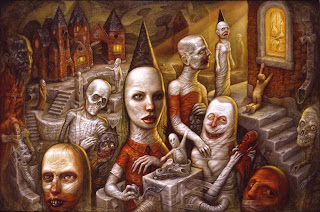 Chris Mars, In Preparation of Barrier Transcendence, oil on panel, 24"x36", 2009.
Chris Mars was born in 1961; he is an American artist and musician. Mars is the former drummer for the Minneapolis, Minnesota, rock band The Replacements. After leaving the legendary band, Mars embarked on a solo career in the 1990's. Eventually, however, he left music for art. His art is inspired by his brothers struggle with schizophrenia.
Artist Statement:

The imagery that is my work stems from the very strong visual and emotional impact of growing up in a family marked by mental illness. My eldest brother Joe suffers from schizophrenia. Joe experienced his first pronounced episode at age 16, and was immediately institutionalized. As a result, I acquired an early and lasting fear that if you are not one of society’s “Normal” members, then you are likely to be labeled, whisked embarrassingly away from your family, stripped of your freedom, drugged and humiliated. Joe was hospitalized on and off throughout my childhood and adolescent years. The seemingly medieval hospital visuals etched into my consciousness, along with the trauma of my brother being repeatedly taken from us. The sights, sounds and smells I experienced as a small child visiting him there are prevalent throughout my work.

In each piece, I am freeing my brother. I am creating a monument to him and those like him. I rescue Joe from the oppressive institutions of the 1960s, the stereotypes of society here today. Through my work, I challenge the cultural system that finds it easier to turn their heads, their hearts, away. I urge the viewer to consider the beauty, on a grand level, of that which may appear ugly at first.


As an adult I can comprehend mental illness, even the need to institutionalize people. But as a child, my brother’s schizophrenia was met with horror, depression, confusion and fear: Fear of the system, fear of the words, the hospitals, the demons others saw. Fear that it would happen to me next. Through my own need to create, to communicate, I have gained through my work an understanding and insight into these early, lasting, and tragic events. I am continually compelled to explore this.


During my visits to the hospitals, looking into my brother's eyes, I knew so much more than the clinicians did. I knew the depth of this person, what made him laugh, his interests, what he was proud of. But what I could only and can only imagine is the hardship, confusion, embarrassment and despair that he suffered from being so singled out by a disease that at the time, they knew so much less about. Through my work, I try to understand this. I try to show my love. This is what I seek to share with you.

The art work entitled A Preparation of Barrier Transcendence refers to evaluations brought forth by society. It is a cry for break through of these labels. In 2009 the work was exhibited at La Luz de Jesus Gallery in Hollywood, California, and it was priced at $75,000.