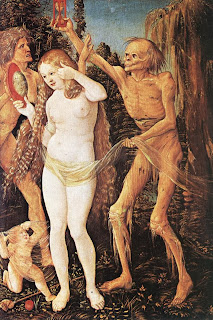 Hans Baldung Grien was estimated to have been born in 1484, Schwäbisch-Gmünd, Germany to a family of known intellectuals, academics and professionals. His artistic training may have first started around 1500 in the Upper Rhineland, Strasbourg(Now France), and later around 1503 he was apprenticed to the most renowned artist in Germany at the time, Albrecht Dürer. Here, he was given the nickname “Grien” and later used in his monogram. After he finished his apprenticeship Grien returned to Strasbourg, joined a guild the "zur Steltz", opened a workshop, and married. Not only concerned with painting, he was familiar to woodcuts, altarpieces, drawings, tapestries, allegories and mythological motifs. Hans Baldung Grien died in Strasbourg in 1545.

The number of Hans Baldung's religious works diminished with the Protestant Reformation's discouragement of idolatry. Around the same time that he produced Adam and Eve, the artist became interested in themes related to death, the supernatural, witchcraft and sorcery. (About.com, Art History)


The authorship of the painting “Three Ages of the Women and the Death” was a mystery and was originally thought to have been created by Lucas Cranach and Albrecht Altdorfer, but was eventually discovered that it was pained by Hans Baldung Grien. The theme presented by the painting is a puzzle that has remained the subject of speculation ever since its creation in 1510. It is now housed in the Kunsthistorisches Museum, Vienna, Austria.

This particular painting has four figures, the three stages of a woman (life), and the fourth figure, the eventuality of all things, death. This painting is a stark example of the exhibition, showing that in the end we all must turn to death.
References:
http://arthistory.about.com/od/namesgg/l/bl_grien.htm
http://www.ibiblio.org/wm/paint/auth/baldung/