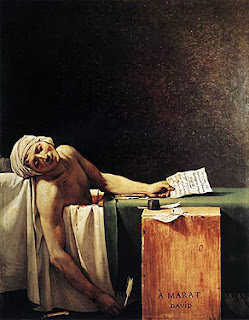 Jaques-Louis David, The Death of Marat, oil on canvas, 65"x50", 1793.
Jacques-Louis David was born in 1748. He received an excellent education at the Collège des Quatre-Nations, but he was never a good student: he had a facial tumor that impeded his speech, and he was always preoccupied with drawing.
Statement:

The image is one of the most famous images of the Revolution, capturing the murder of the French Revolutionary leader Jean-Paul Marat. It shows the radical journalist lying dead in his bath on 13 July 1793 after his murder by Charlotte Corday. (Unknown, Wikipedia)

This image became the leading image of terror and immortalized both Marat and David in the world of revolution. David portrays Marat with all the marks of the real murder.

The image illustrates the climax of mortality--death.