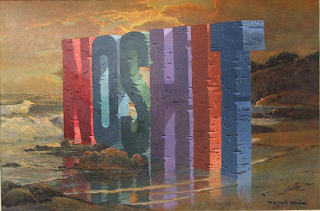 Wayne White, No Shit, acrylic on lithograph, 32"x44", 2012.
Wayne White is an American artist, art director, illustrator, puppeteer, among other things. Born and raised in Chattanooga,. He graduated from Middle Tennessee State University. In 1986, Wayne became a designer for the hit television show Pee-wee’s Playhouse, and his work was awarded with three Emmys. He also worked in the music video industry, winning Billboard and MTV Music Video Awards as an art director for seminal music videos including The Smashing Pumpkins' “Tonight, Tonight” and Peter Gabriel's “Big Time.” Furthermore, Wayne has recently had great success as a fine artist and has created paintings and public works that have been shown all over the world.
Statement:
This painting is a perfect example of White's work: a random message or word on a peaceful landscape painting.

Psychologist Richard Beck has found that the charge of a bad word such as shit is linked to death anxiety. Reference to feces is not just a reminder of animal characteristics but of human weakness and the unavoidable death ahead.

Sources:
http://waynewhiteart.com/
http://buy.beautyisembarrassing.com/
Beck, Richard. Profanity: The Gnostic Affront of the Seven Words You Can Never Say on Television. 2009.