Pod Five is proud to introduce Memento Mori. This exhibition is dedicated to the mortal nature of man--a characteristic all humans share. The name of this presentation is taken from the Medieval expressions "remember that you will die." While the expression, today--In a time of entitlement, may poses a negative punch, originally the phrase served as a reminder of higher and more worthy interests--conscientiousness, wisdom, legacy, and spirituality. The phrase emphasized the beauty of mortality, a human weakness that can be turned into strength, an end which can be the beginning of an afterlife, and fear that can also be a time of joy. Such a human issue can best be explained and understood through the humanities--literature, music, and art. In Memento Mori, mortality will be presented through the strokes of a bush, strikes of a chisel, and the work of hands--it will be illustrated through the eyes of artists and upon the fine arts.

Each one of these great artists was selected by the members of Pod Five, and the relevance was assessed to the discretion of the selector. Meetings where held in which members exchanged feedback and addressed every work's relevance as well. Some of the artist where already known to their selector, while others where discovered in the process of putting the exhibition together. The internet was the main source for research throughout the project. The extensive research revealed dozens of talented artists and their works. However, due to projects agreed size, many of the artists and works could not be included in this virtual gallery. Furthermore, Pod Five has included some of the greatest names in history as well as the contemporary art world. 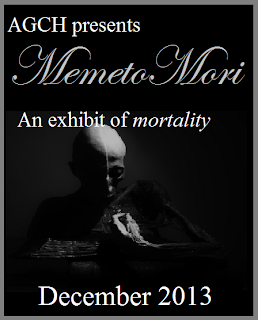